Last night, I was thinking out loud to hott husband on the phone (he’s in Atlanta on business) about what my “E” post should be.  Since the theme of Accepting Self(ish)-Improvement Challenges has poked its little head out, I now have parameters.  He first said “Exercise“, to which I explained, unsuccessfully, how yesterday’s “Diet” post was really more about Exercise.  I reminded him of my theme, and he – without hesitation – blurted out “Expectations“.

I know this is the one thing that sometimes tries to divide us.  I’m sure it’s really at the root of most people’s problems.  But we’ve definitely identified it as a big difference between the two of us, and my way of managing expectations as being the spark that starts most of our very VERY few conflicts.

Example:  I walk very fast.  I do everything very fast.  I can go to the store with a list of 20 items, get in get out and get home in thirty minutes.  I walk in the door, and hott husband says, “Oh my gosh…you did that in like two minutes!”  Husband doesn’t do anything hastily.  He – as people should – enjoys everything.  He loves to look at items in the grocery store, even if he has no intention of buying them.  He’ll see jelly with a funny name and make up a song about it, dancing in the aisle for a good solid five minutes.  He also doesn’t spend any brain cells trying to strategically plan his grocery run…He might meander from one side of the store and back and back again four times, and it doesn’t stress him out.  All being said, it takes him for.ev.er. to make a grocery run.  He walks in the door, I’ve been running through the three most rational scenarios that could have caused his delay (accident, phone call from family member, fire in front of the exit), so not only has my expectation of time not been met, but when he walks in the door I’m expecting his “Oh my gosh you won’t believe what happened” story to explain his delay.  Instead, he be-bops in the door singing his new jelly song, and the instant he sees “the look“ on my face, he knows what’s about to happen.  It shouldn’t be a big deal.  It shouldn’t even be a deal.  Why do I make it a deal?

He acknowledged on the phone last night that I haven’t done that in a long time.  But there are still little cases-in-point from time to time.  Not that our relationship is comPLETEly perfect, but it’s pretty dern close.  And I can control one of the tiny little things that blemish it on a monthly-ish basis.

I look at him – Mr. Positive – and wonder how it is that he doesn’t even seem to ever have any expectations that those around him need to try to meet.  And I realize that’s just it.  He’s positive.  I am much more of a Negative Nelly when put up next to HIM, and I’ve never had to see myself that way. 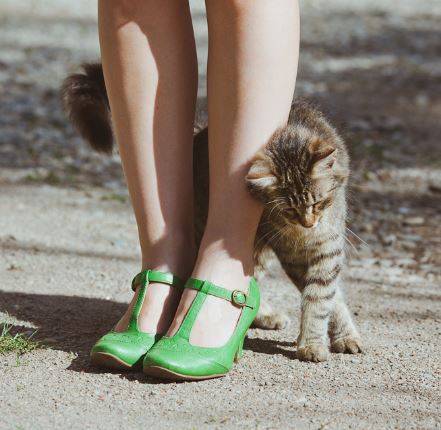 I need to let him rub off on me.  Not only do I need to Let it Go, I need to not have IT to begin with.  This one’s going to be tough.  (I think I’ve said that about Acceptance, Boys, Confidence, and Diet.  Guess it’s part of the theme too).

In about four minutes I’m resigning from my job.  New chapter.  I don’t even know WHAT to expect, so I’m going to look at that as a good thing.  This might birth tomorrow’s topic.  🙂

This was one lesson I had to learn over and over again until I mastered it (well, not completely *laughs*). Bless you for even attempting it!
Best Wishes!
Lori

Glad you accepted the Challenge.
I like your posts so far.
Don’t forget to take Sundays off!

Heather M. Gardner / @hmgardner
Co-Host, Blogging from A to Z April Challenge
The Waiting is the Hardest Part

Not allowing other people’s expectations to define me has been one of the most difficult thing for me to learn but I think I’m almost there though sometimes I cave and give in. Another well written post 🙂
Amelia
@sonobeus
Words From Sonobe

I can’t even tell you how much I resonate with this. Not that I do everything super quick but I have 3 jobs and don’t understand how people have 1… So yea… It’s a process?

Now my missus and me are the other way round. She does everything s l o w l y. And meticulously. Me, I get there as quick as possible and move on to the next thing. We’ve made it through over 50 years despite that so you have no need to worry!
@fparkerswords
Frank Parker’s Author Site